A group of terrifyingly smart and seditious criminals come together in a warehouse to hatch a plan. This team of thieves is attempting to pull off the hardest heist in history. If successful, the crew will reap the rewards of a payout larger than they can imagine. Leo Pap is the mastermind organizer with a brain built to understand how things work, especially his team. Ava is the attorney keeping the legal aspect in check. Roger can talk his way into or out of anything and also happens to be an expert in security systems. Hannah has the low down on high finance and is likely the most intelligent of the group. Stan the smuggler says it all, a born-talker with a romantic mind. No heist is complete with detonations and demolitions and that role is reserved for the sarcastic Judy. Bob is the boastful safe-cracker who is coming up against the toughest vault yet. The whole team is set to be challenged by FBI Agent Nazan Abassi who is tracking them at every turn. The team must rely on each other and remember their roles if they are to come out of this alive and unscathed.

Kaleidoscope is a heist drama television show. It is produced by Scott Free Productions, the production company of legendary Hollywood filmmaker Ridley Scott, who also serves as executive producer. The show is created by Eric Garcia for Netflix. Garcia is a novelist and screenwriter known for his writing on Repo Men, Anonymous Rex, and Strange but True. The eight-episode series has Jose Padilha signed on to direct at least two episodes. Everado Gout, Mairzee Almas, and Robert Townsend are also directing episodes. The show has a non-linear approach to story-telling and can be watched in any order. Episodes are named after colors and the show is described as offering a unique streaming experience.

Kaleidoscope features a cast led by the well-renowned Giancarlo Esposito, a veteran of television acting with a host of impressive awards and nominations. Best known for his role as Gus Fring in the AMC hit show Breaking Bad, Esposito plays a major in the series. He is joined by Paz Vega, a Spanish actress who has racked up an impressive list of television and film appearances in Spain and the US. Tati Gabrielle is the last of the three main characters in the series. Gabrielle has been featured in other Netflix series such as Chilling Adventures of Sabrina and You. The expanded cast of this jigsaw-heist series includes Rufus Sewell, Rosaline Elbay, Peter Mark Kendall, Jai Courtney, and Niousha Noor. Kaleidoscope was released on January 1st, 2023 on Netflix.

In September 2021, Netflix revealed that they has ordered eight episodes of a new series with the working title Jigsaw. The show was written and executive produced by Eric Garcia with Scott Free Productions and Automatik Entertainment signed on as the production companies. The main cast announcements were also revealed alongside the fact that the show had already begun filming at Netflix Studios in Brooklyn. The initial announcement also confirmed that Jose Padilha would direct the first two episodes. The series wrapped in filming in March 2022. In May of the same year, further directors for the show were announced including Mairzee Almas, known for her work on 12 Monkeys, The Sandman, and Jessica Jones. Kaleidoscope was confirmed to be the official name of the series in November 2022. Alongside that reveal was the release of a behind-the-scenes video giving additional details about the inspiration behind the story and the timespan of the series. In December 2022, a new trailer for the show was released teasing a story of revenge with a seven billion dollar score. Netflix released all episodes of Kaleidoscope on January 1st, 2023. 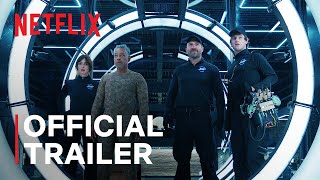 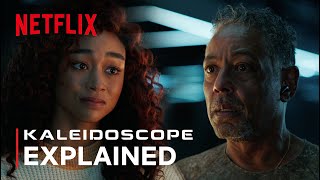 Currently you are able to watch "Kaleidoscope" streaming on Netflix, Netflix basic with Ads.