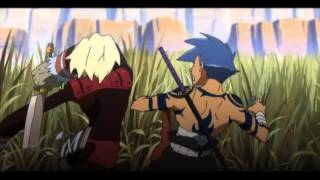 In the distant future, mankind has lived quietly and restlessly underground for hundreds of years, subject to earthquakes and cave-ins. Living in one such village are 2 young men: one named Simon who is shy and naïve, and the other named Kamina who believes in the existence of a “surface” world above their heads.

Currently you are able to watch "Gurren Lagann" streaming on Netflix, Crunchyroll.