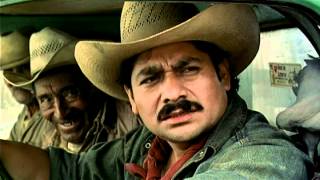 Jerry Welbach, a reluctant bagman, has been given two ultimatums: The first is from his mob boss to travel to Mexico and retrieve a priceless antique pistol, known as "the Mexican"... or suffer the consequences. The second is from his girlfriend Samantha to end his association with the mob. Jerry figures alive and in trouble with Samantha is better than the more permanent alternative, so he heads south of the border.

The Mexican streaming: where to watch online?

6.1 (103k)
Genres
Comedy, Crime, Romance
Runtime
2h 3min
Age rating
R
Director
Gore Verbinski
Under the new EU law on data protection, we inform you that we save your history of pages you visited on JustWatch. With that data, we may show you trailers on external social media and video platforms.