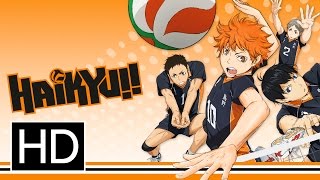 Shōyō Hinata was inspired to play volleyball after seeing Kurasuno High School's "little giant" competing in the national tournament on TV. He trains relentlessly to make up for his lack of height, but suffers a crushing defeat in his first and last tournament of middle school at the hands of his rival Tobio Kageyama. Vowing revenge against Kageyama and hoping to follow in the little giant's footsteps, Hinata joins Kurasuno High School's volleyball team. To his initial dismay, Kageyama is also on Kurasuno's team. The former rivals soon overcome their differences though and combine their strengths to form a legendary combo using Hinata's mobility and Kageyama's precision ball-handling. Together with their team, they compete in prefecture tournaments and promise to meet Kurasuno's fated rival school at nationals.

Currently you are able to watch "Haikyu!!" streaming on Netflix, Hulu, Crunchyroll, HiDive or for free with ads on Crunchyroll. It is also possible to buy "Haikyu!!" as download on Google Play Movies, Amazon Video.

8.7 (13k)
Genres
Drama, Animation, Comedy, Sport
Runtime
24min
Age rating
TV-14
Director
Susumu Mitsunaka
TV
Under the new EU law on data protection, we inform you that we save your history of pages you visited on JustWatch. With that data, we may show you trailers on external social media and video platforms.