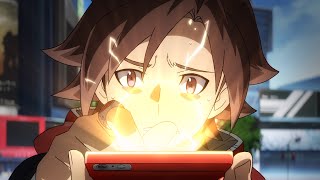 Ren Homura returns to his former residence, yet he feels very uncomfortable: he possesses no memory of having lived there. Without warning or his permission, a game called "Monster Strike" installs itself into Ren's smartphone; monsters of the game then literally fly out from his smartphone and start fighting on streets. Watching the fighting in amazement, Ren starts picking up his lost memories.

Currently you are able to watch "Monster Strike" streaming on Crunchyroll, VRV for free with ads.